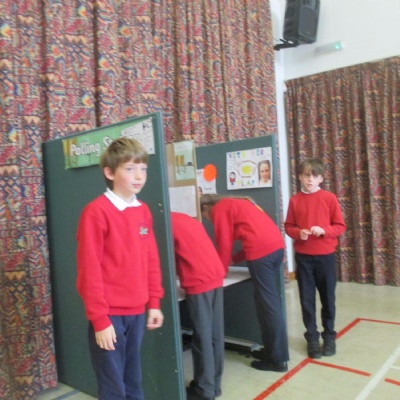 YEAR 5 pupils have been busy canvassing the playground for votes in a school election which was held on Thursday.

Alongside the much-publicised general election, the school held its own mock election where pupils voted between five parties — Blue Tree; FLAP; Green Leaf; KEP and Mastery.

The children gained hands on insight into how the election works as they created their own parties, designed their branding, ran for office, developed manifestos, canvassed support and created campaign posters and literature. The leader and deputy leader of each party then made a speech in assembly, spreading their messages and touting for votes.

The children then organised the election – registering voters and preparing the polling station. On Friday, in assembly, the Reporting Officer announced the results:

The Mastery party has been elected and will work with School Council during the rest of this termm to put some of their plans into action.

If you vote for us we will help make our school a better place for wildlife:  What we will do:

We would like to have more bins in the playground with Litter Monitors and mini basketball hoops for the younger children.